February 7, 2012 Administrator All About Me, Places to Go, Uncategorized

Today was one of those busy days that, in the end, doesn’t have much to show for it. I started off at physical therapy where Julio twisted me into a pretzel. His reasoning? “Must stretch it out!” Then he worked it out of me. Tied my feet with bands and told me to walk. I stood on a board with a rounded base and was told to bounce a ball. This is supposed to help my coordination and core muscles. I was also on a shuttle and told to launch myself. Not sure where I was to launch to, but I finally finished. Whew.

Then I headed 20 miles west so that I could run a few errands in Yucca, including picking up a 40 pound bag of dog food from Pets Plus. When you are feeding 4 Great Danes a 40 pound bag does not go far. On a positive note, I can now pick up that 40 pound bag of food myself. When my son saw me coming out of the store with it, he said a few cuss words (at almost 22 he’s too old for me to wash his mouth out and, in truth, he learned the words from me). Then he tried to grab the bag from me and I tried to hold on. (I’m very proud that I can carry it…it’s been a long time depending on others to carry it.) This poor man walking by us thought I was being mugged for the dog food! A couple of other stops and I dropped him off at his place, then decided to try out the new store in town, Save A Lot.

Save A Lot is a big deal in our little city. It has gone into the old Desert Ranch Market (known as “Desert Rat Market” to the locals). That store had gone down hill, with non-working refrigeration equipment and expired food. When the news a new store was opening up it was met with joy. The nearest grocer from there is several miles up the highway, making it hard for those without reliable transportation to shop. Save A Lot opened last week to huge crowds, so I waited a week to let that die down. 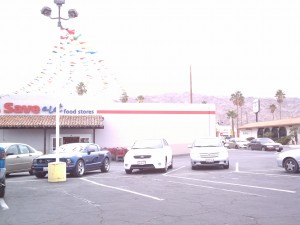 As I pulled into the parking lot my friend Paige called. She was raised in Two Nine, but a military spouse moved her away several years ago. She was curious about what the new store looked like and asked me to be her spy. On went my hat and out came my camera! 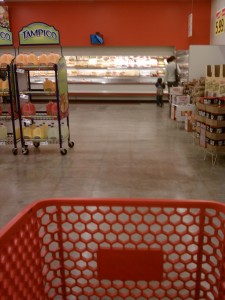 Heading down the aisles, I tried to be sneaky 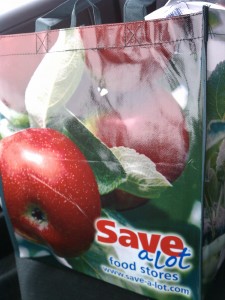 You do have to bag your own and it’s three cents for every bag you buy from them, but for their grand opening celebration they are giving a free, reusable bag for every $10 spent. I spent $15 on a few things that were cheaper than the local grocery store. Their fruits and vegetables were reasonable and looked good. Better than our local commissary, that’s for sure.